This is the first guest post of 2015 (I hope there will be many!), written by my close friend Alison Egan. Alison has been living in China (first Beijing and now Shanghai) for many years thus I could think of no better person to write a post about all that this incredible, and huge, country has to offer. Below is her pick of the top 10 things to do in China, from the eyes of a local/expat. I’m sure she would love to hear any feedback you have!

10. Hike the Great Wall of China 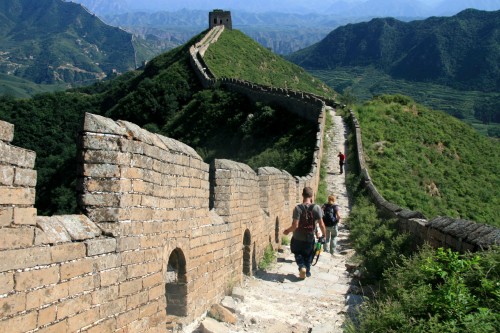 Avoid the popular tourist-drenched parts of the wall at Badalin and head straight for Mutianyu (about 1 hour drive from Beijing) where you can hike in peace while enjoying the beautiful scenery of the surrounding mountains. It is becoming more and more popular though, so maybe even venture further to Jianko but be sure to beware of falling rocks!

9. Watch the sunset at the Summer Palace

Pack a picnic and a bottle of wine in the early afternoon and head straight to the Summer Palace on the outskirts of Beijing City. While here, rent a boat on the Summer Palace Lake and watch the sunset in the distance over the Great Wall of China while sipping some french wine. Do not drink Chinese wine!! Don’t forget to bring your corkscrew!

8. Cycle through the Beijing Hutongs

Allow yourself to get lost cycling through the old Beijing alleyways and you might just find some really interesting sights. Elderly people playing majong, people drinking snake blood from a bottle with the snake inside, children walking around with pants that have holes cut out on their bottom so they can just squat and poop whenever they feel like it! A great way to see Beijing street scenes up close and personal.

Beijing’s famous dumpling restaurant, Baoyuanjiaozi at Maizidan Lu, will not disappoint you. While not the most aesthetically pleasing of restaurants, it is about as real as it gets when it comes to chinese restaurants. The dumplings are a famous Beijing delicacy and come in a variety of bright colours. A must try!

Most people visit Xian for the famous Terracotta Warriors but for me the 6 hour all-through-the-night climb of Hua shan Mountain was one of my all time favourite travel highlights. It is one of the most dangerous climbs in China but incredibly rewarding at the top when you arrive for sunrise…and a cup of tea! You can read more about the world’s most terrifying trail here.

Arriving in Shangri-La at night was sort of like landing in Mars. Orange dusty landscape like nowhere else on earth. A beautiful place where the air smells of burning incense and buddhist monks are floating around in their orange robes. The oxygen aerosol cans that you have to bring with you everywhere and frequently spray in your mouth because of the altitude is quite a novelty.

4. Have a coffee in the Old French Quarters of Shanghai

Take a stroll around the french concession or even better take a bike or vespa. Stop by the Yongfu Elite club which is an old colonial building (was the old British Embassy) hidden behind a wild and overgrown garden. Have a coffee here in the late afternoon at a candle-lit table.

3. Party on The Bund by night, Shanghai.

Have dinner on the terrace of M on the Bund, a waterfront area in central Shanghai, followed by a cocktail and a dance at Bar Rouge terrace. You will be blown away by the famous skyline of Shanghai with the flashing neon lights of all the skyscrapers.

This was a magical moment for my mum and I on our trip to Guilin. After spending the day floating on rafts on the River Li, the fisherman’s light show was a spectacular end to our day. It brought tears and goosebumps. Words cannot describe it you just have to experience it!

1. Go to the Aircraft Carrier Party in Tianjin.

This is an all-night rave with Dj’s from all around China coming to put on the party of the year. It is hosted in a decommissioned Ukrainian aircraft carrier which permanently rests at the port of Tianjin, 3 hours from Beijing. It is now a hotel and casino but still has the upper deck filled with aircraft. You might just meet your husband here…this is where I met mine!

Here are some other great blog posts on things to do in China from fellow bloggers:

GETTING AROUND CHINA – PLANES, TRAINS & AUTOMOBILES

THE SOUTH PEAK OF HUA SHAN

YOU NEED TO GO TO CHINA

Blogging my way around the world. Come follow my adventures, who know's where we'll end up. View all posts by intrepidtraveller